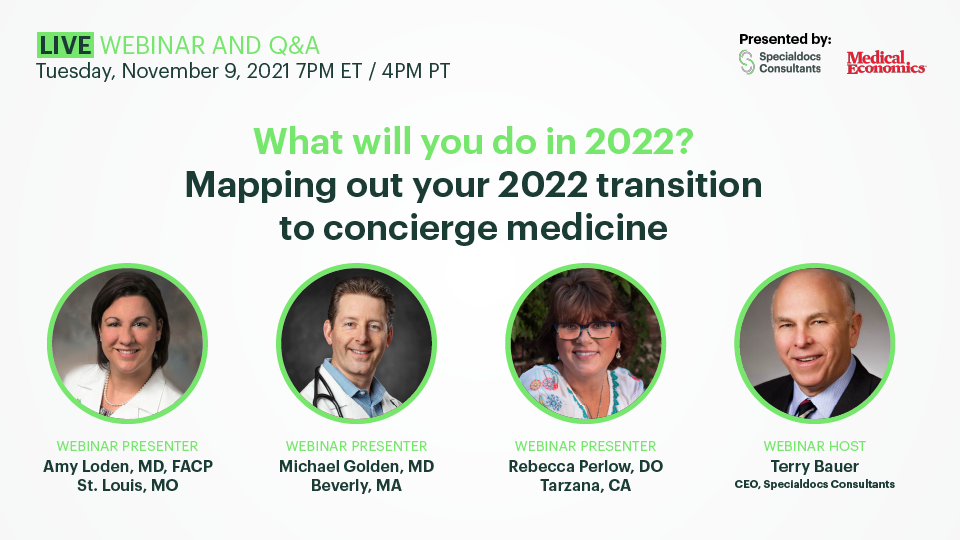 Specialdocs Consultants and Medical Economics present this new four-part webinar, “What will you do in 2022? Mapping out your 2022 transition to concierge medicine”. In Part 2 of the webinar, the physicians talk about what particular catalyst led them to finally begin their concierge practice, how COVID-19 effected beginning their concierge practice, and what effect on them it was going from a few thousand patients to a few hundred. In Part 3 of the webinar, the physicians discuss challenges they encountered when starting their new practice, specifically bringing in new staff and adjusting to this new model of care.

Rebecca Perlow, DO, an OB-GYN from Tarzana, California was running around like a resident for several years. She says, “I had absolutely no self-care. I have finally begun doing that self-care that I ask my patients to do all the time.” With her new concierge practice, Dr. Perlow found the time to take better care of herself and respectively, her patients too. Regarding COVID-19, Dr. Perlow found Specialdocs weekly Tuesday meetings on the subject to be very insightful. She goes on to say, “Your team has sometimes 52 physicians on Specialdocs Tuesday night meeting and we would talk about everything about COVID. What do you see in Boston, what do see in New York. All of us were able to talk and share information that was absolutely crucial to practicing really good medicine and not fear based medicine. It brought us all together so nicely.” Specialdocs prides itself on connecting its clients and supporting them during these difficult times.

For Michael Golden, MD, from Beverly, Massachusetts, one of his chief concerns before transitioning to his concierge medical practice was whether his patients would come along with him and what reaction they would have. After messaging his patients with Specialdocs help, he says, “I got hundreds of the kindest, sweetest, most heart-wrenching messages from people who were coming and people who were not going to come. Nowhere in this process did anyone say anything hurtful.” So many people decided to come that Dr. Golden now has a waiting list, saying “it would be difficult to honor the commitment I made to my current patients”. Feelings of guilt that all patients may not be able to come is common. But for those patients that do come over, they fully appreciate the concierge model and for Dr. Golden, he found his new practice and the time to now fully care for his patients to be a truly rewarding experience.

Amy Loden, MD, FACP is a doctor from St. Louis, Missouri and her preconceptions of those in a concierge practice were prevalent in her mind when deciding to transition to the concierge model. “I think about 12 months ago I would have laughed if somebody told me I’d be a concierge doctor. The mindset I’ve had thru residency is that these concierge doctors, they’re trying to take the cream of the crop and they’re really not doing that much. But I knew something was wrong from the day I started outside of residency. I was thrown into a model of care where I had to see patients in 15 minute increments. I’m dealing with patients with multiple chronic diseases and trying to balance that with walk-in patients, I would of beat myself to death trying to stay in this model. To be able to give my patients the time now, it’s been so rewarding.”